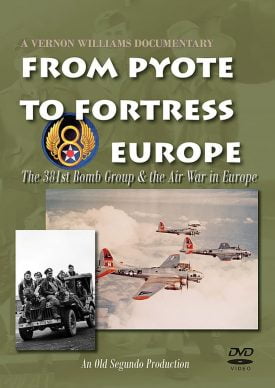 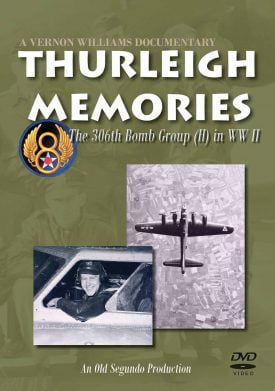 Newly remastered and expanded edition now available with free shipping to US addresses.


Reactions to Pearl Harbor by men who knew that war was coming on the heels of the Japanese attack.

Life in Deopham Green during the war for British families and the Yanks.

A close look at combat missions and the toll that it took on the men of the 452nd Bomb Group in the skies over Europe.

The Red Cross and the Aero Club in support of the air war at Deopham Green.

Potava missions to Russia as the end soon follows.

“I can remember the first two Americans that we saw–these very smart young men marching down the road together, exploring things I suppose. And my mother said to say hello and ask if they have any gum, chum.”

Sneak Preview of Activation & Training, appearing early in the film

Deopham Green tells the dramatic story of the men of the 452nd Bomb Group and the British families who lived on or near their base at Deopham Green in World War II England. The documentary begins with the Pearl Harbor attack and the story of activation and training in the United States. The film tracks the air crews and ground personnel as they acquire the tools of war, and then make their way to England and the front lines of the air war in the European Theater of Operations (ETO).

This documentary contains eye witness accounts from both American servicemen and British family members as they remember the air war over German-held territory, and the stories of sacrifice and courage that played out every day at Deopham Green and over the skies of Europe. This film provides an exciting look into the human side of war as nearby British families suffered the threat of German air attacks and wartime sacrifices while ground crews labored to keep the B-17 flying, and the air crews struggled to beat the odds over Nazi Europe. Deopham Green is the breath-taking story of ordinary people rising to greatness in the struggle against darkness and evil. Winston Churchill’s words certainly apply to Deopham Green and her people, both British and American: “This is their finest hour.”