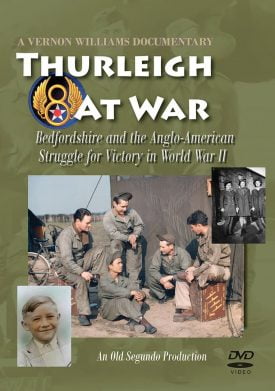 The Anglo-American Experience in Wartime Norfolk, 1939-1945

Impact of Hitler’s invasion of Poland on the people of Britain and how World War II in Europe begins in September 1939.

Changes in the British Isles as the war comes to London and war construction begins everywhere.

The coming of the Yanks at Deopham Green and how that arrival changes life in the villages in the area.

The American relationship with children and how the military treated British families during the war.

The Air Cadets go flying aboard the B-17s at Deopham Green.

The air war brought life-changing experiences for families living in the rural areas of East Anglia.

“These British families lived on the battleline, a war front that never receded into the distance, that remained around their homes for the duration.”

World War II in Europe began in September 1939. In the villages near Attleborough and throughout the surrounding towns in County Norfolk, British families turned to wartime footing as their young men went to the forces, and each community struggled to transition to rationing, war work, and the constant threat of German attack from the air and from the sea.

In 1942 the first Yanks arrived in Britain, and they soon came to Norfolk where the American airfields rapidly appeared across the landscape and brought the Allied air war to hearth and home. This is the story of British families and young Americans in Norfolk who lived together on the battleline of the emerging air war. Together they formed a sense of community and place as each day brought new challenges of war.